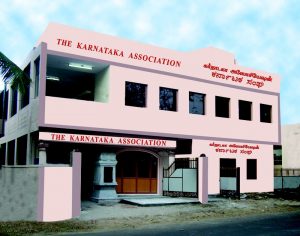 The Karnataka Association was started in 1938 by late Sri U Venkat Rao along with few Kannadiga bureaucrats. It was a meeting point for all those hailing from Dakshina Kannada. Advocate B R Bhat was the first President. The membership was later expanded to all citizens hailing from Akanda Karnataka and residing in Coimbatore. The purpose was to enable social contacts, exchange ideas and help, and organize cultural events.

As the membership and the programs multiplied a land was purchased at Tatabad, and later during 70’s super structure was constructed housing the present Karnataka Association auditorium. The premise is ideally used for Weddings, Family function and Social gatherings. It is often rented out to friends for their family functions.

Around 450 members are playing a great part shedding away various traditional, ideological, cultural and linguistic differences between the people of Tamilnadu and Karnataka. It has also developed a spirit of brotherhood and friendship, cementing the co-existence of the people of these two states.

Become and Member and enjoy the rich culture of the kannada people and Karnataka.
Contact our office at Dr.Radhakrishna Road, Coimbatore.